Tam Coc: The Alternative to Halong Bay for Tight Schedules

Had I more than one day to explore Northern Vietnam after my work engagements in Hanoi, I would’ve joined the masses in Halong Bay. No matter how beautiful the World Heritage Site was, however, taking an eight-hour round trip to spend four hours on a ship didn’t seem like a good use of my time. Tam Coc came up often in discussions about alternatives to Halong Bay; being less than two hours from Hanoi, it seemed like a sensible pick.

I decided on one of the many organised day trips that also included a visit to the ancient citadel of Hoa Lu and a bicycle ride around the rice paddies. The Ninh Binh region is full of the same limestone formations as those out at sea, but I’ll focus on the river ride in Tam Coc for this post. 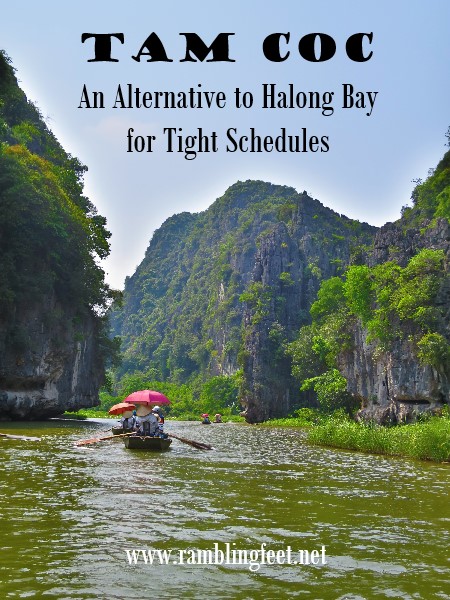 The ride through Tam Coc on the Ngo Dong river

At the pier, the guide took care of our tickets while we clambered into wood-and-aluminium sampans in pairs. People who are taller than six feet will find the 90-minute return journey uncomfortable; their knees will be up to their ears, the seats are unyieldingly hard, and they’ll have to duck under the ceilings of the three “caves” that the Ngo Dong river passes through. There is no XL-sized motorboat – more on why that was a nice thing in a moment.

‘Scorchio’ is a good way to describe the weather at the time of my visit in May. However, the blue skies were a welcome change from Hanoi’s smoggy greys. Once the ride started, the concrete embankments in the village quickly gave way to verdant paddy fields on both sides of the river. If I’d been there a month later, the same fields would’ve been full of ripe golden grain. At least I wasn’t looking at smouldering heaps of spent vegetation.

READ  A Stroll Around Bamberg in Pictures 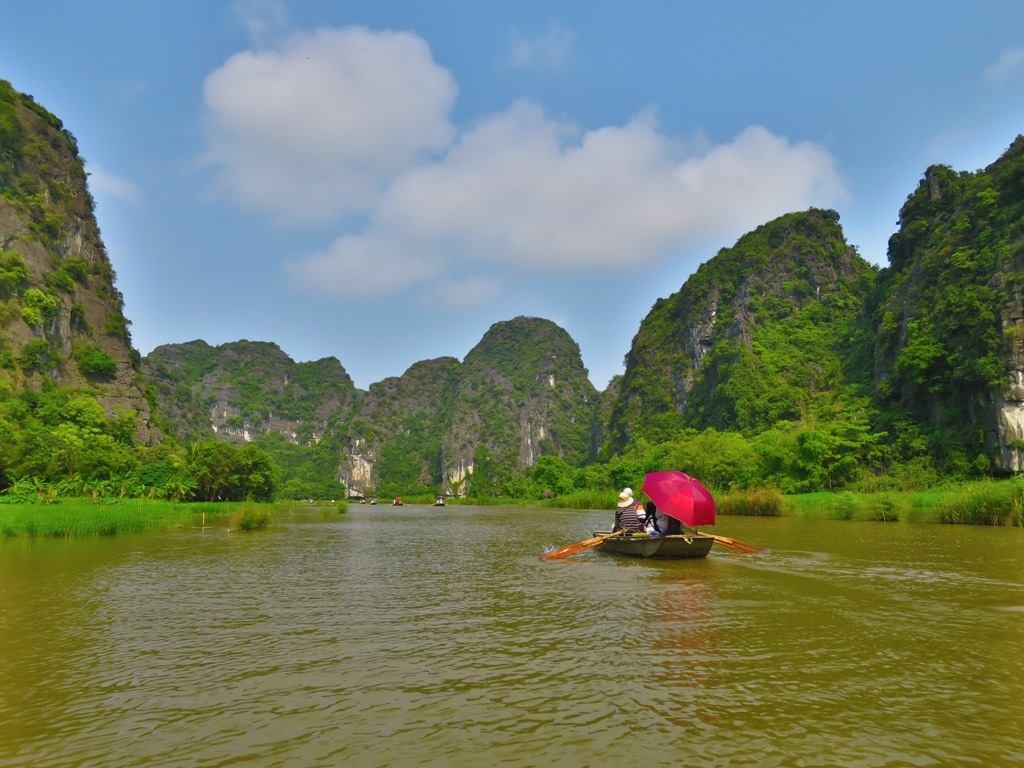 Here come a couple of overused statements about the landscape, and they’re both true: Tam Coc may be aptly described as “Halong Bay on paddy fields”, and you have to use ‘dramatic’ to describe how the limestone karsts rose out of the ground. Even if they were no higher than hills, they completely dwarfed the boats. The vertical cliff faces only served to make these outcrops look bigger.

The grottoes or “caves” that give Tam Coc its name weren’t remarkable, but thankfully they weren’t lit-up like Christmas trees either.

Read: A walk through Long Bien Market at daybreak

The driver of my boat was a woman, and so were all the others. They rowed the boat the entire way, sometimes with their feet. Mine was particularly hardworking; we passed other tour mates and snapped pictures of one another, joking about the price of the photos as we took the piss out of a common scam. I tried to take over the oars for a while but my lack of coordination undid our progress!

Friends of mine said they saw oxen on the banks and even rare primates. As for me, Fortune gave me only the sighting of this snake. The guide had told us on the minivan that the paddy field rats were a delicacy; judging by how healthy it looked, I guess it’d agree. 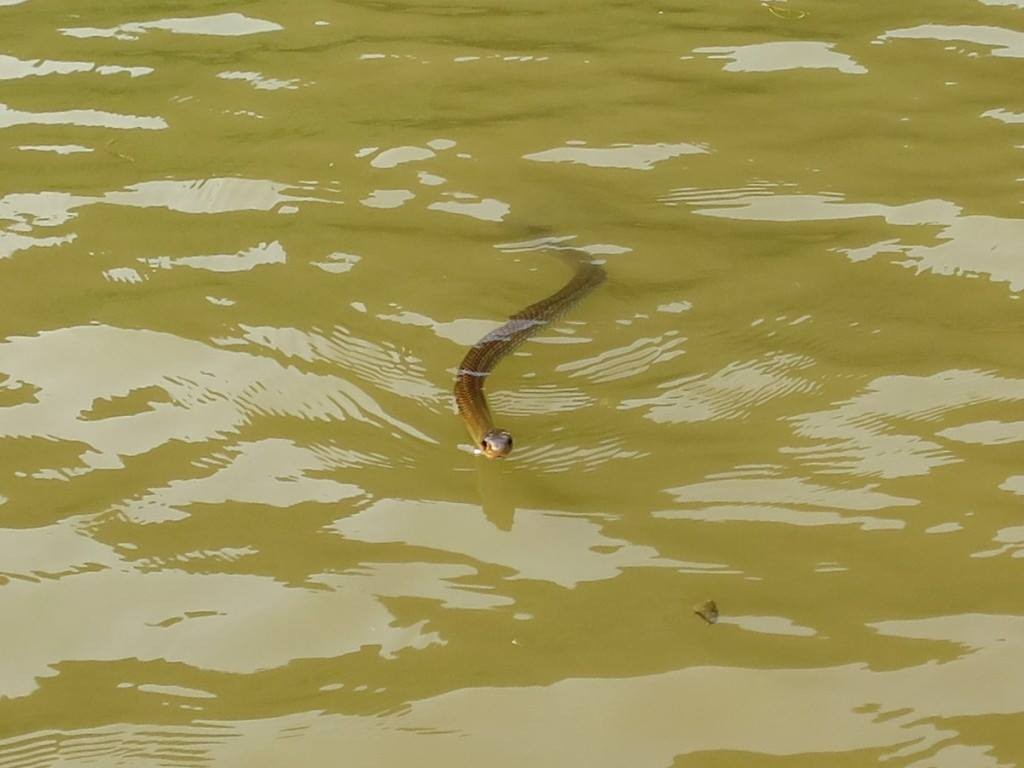 The lack of a comfortable seat aside, I really enjoyed the ride in Tam Coc. It was nice not to have any large boats that would’ve ruined the illusion of rusticness, or the acrid fumes of engines polluting the air. The peace was marred only by the rhythmic splashing of oars on the water. It was a soothing accompaniment to the conversation I had with my American companion.

At the end of the 10-hour tour (including the other activities and four hours on the road), I had no regrets about missing Vietnam’s most-visited attraction. Halong Bay can wait until I have the time and money to spend two nights on a decent boat.

There will be a point where vendors on boats will ask you to buy snacks or drinks at high prices, either for yourself or for your driver. Bring a few from Hanoi/Ninh Binh for your driver instead. If you buy them on-site, open your purchases straight away, so that the driver cannot sell them back to the vendor.

You’re not obliged to buy the souvenirs on the boat too. That said, do tip generously – it’s not part of the ticket price. Rowing in Vietnam’s climate is back-breaking work, so don’t coerce the driver into taking more than two adults.

Some photographers on passing boats will try to get your attention. At the end of your ride, they will then try to sell you the pictures. Ignoring them on the water usually means that they won’t bother you.

While this is not a scam, it’s worth mentioning that if you’re on your own, you can do better than the buffet restaurants and their mediocre offerings. You don’t have much of a choice if the price of your tour includes lunch, however.

Speaking of the tours, don’t let the prices you see online discourage you. You can often get a lower quote by walking into the agency’s office, especially outside the peak season. Since everyone gets their own “special price” (which the agency asks not to disclose to others), however, it’s hard to know what you should be paying. If someone can tell me what’s going on, please leave a comment.

« What You’ll See on a Helsinki Coastal Walk » The Hill of Crosses: Getting There the Cheapest Way