The Hill of Crosses: Getting There the Cheapest Way

Forget those quotes about journeys mattering more than destinations. Unless the drive is worth staying awake throughout, a destination becomes less attractive if I have to spend far more time travelling and queuing than actually enjoying the place itself. (For me, this ratio is 3:1) Lithuania’s Hill of Crosses (Kryžių kalnas) was unique enough for me to make an exception, however.

In the name of budget travel, V and I travelled three hours from Kaunas to Siauliai, took public buses, walked a lot and endured the elements to explore a site barely larger than a football field. No one said that getting there would be easy but we spent just 13 euros per person.

History of the Hill of Crosses

Pilgrims have been making the journey to this former hill fort to plant crosses since at least the 19th Century. In that time, the story of the Hill of Crosses mirrored that of the Baltic nations. Over the centuries, their neighbours subjugated them and suppressed their culture, albeit with little success. So it was with the hill. During the Soviet occupation, the authorities cleared the site multiple times, only for new crosses to appear within days. There was just no way to keep them down.

Today, 26 years after Estonia, Latvia and Lithuania broke away from the Soviet Union, they are thriving countries. As for the hill, pilgrims have since placed more than 100,000 crosses on the site. That number continues to grow daily.

I’d planned our visit to the Hill of Crosses as a stop on the way to Riga from Kaunas. That journey would’ve taken just four hours by coach but a trip to the site required a detour to the northwest, to Siauliai. That meant an additional coach ride and two hours of travelling.

If you have the money, you can go to the Siauliai tourist office to arrange a taxi to take you to the hill and back for 22 euros. That’s not what this post is about, though.

At 1.64 euros, the public bus got us there and back for less than one-tenth of the taxi fare, with the trip conveniently starting at the Siauliai coach station. I have included directions at the end of this post. The only catch? After alighting the bus, there’s a further walk through the open countryside to get to the site.

While it didn’t rain, nothing stopped the wintry winds from trying to rip our eyes out. We knew we were on the right track by following the road but it seemed to take forever for the hill to come into view. Despite its name, the Hill of Crosses was closer to a mound in height and appearance.

A flight of narrow steps bisected the mound and led straight to the peak. On either side, crosses covered every square inch of space. Some rose out of the ground and tower over visitors like trees; smaller ones carpeted the ground, or hung off the bigger ones like epiphytes. There was no space or light for grass to grow under them. The offerings were so numerous that they covered a smaller mound behind too. 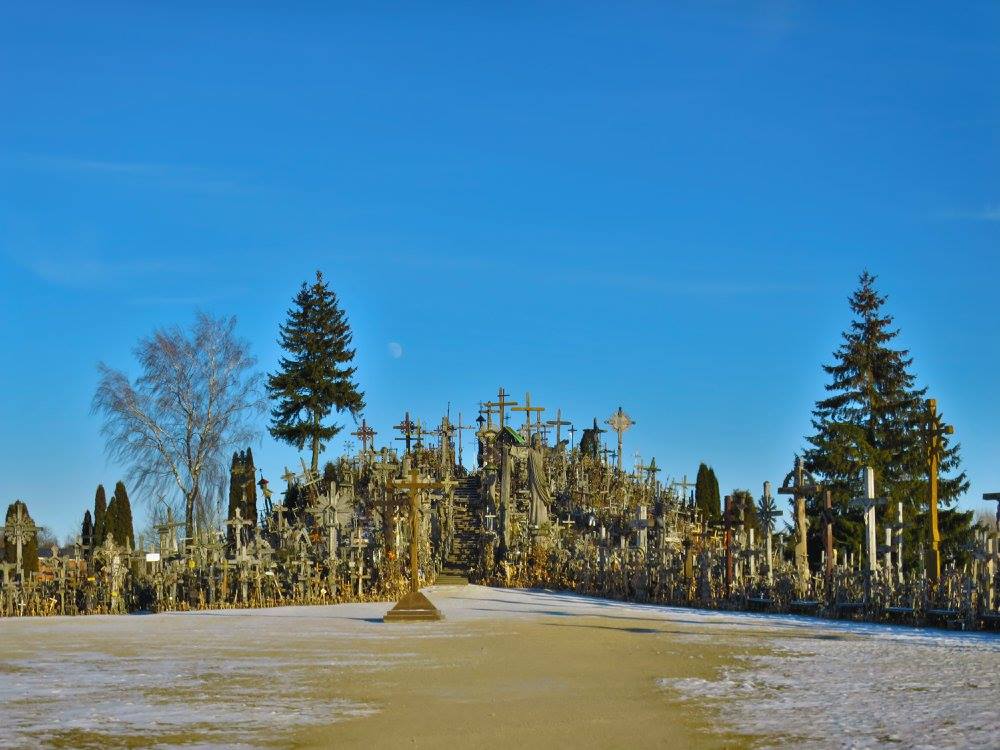 Vilnius after dark: Sights in the capital

With Lithuania being a Catholic country, Latin crosses were unsurprisingly the most numerous, with many of them being crucifixes too. However, Slavic and Celtic crosses were also present, as were other types of icons. Some had roofs over them, while others had the Blessed Virgin and the Beloved Disciple at their feet. The quality of the carvings and castings varied widely.

In this forest of icons, no two items were the same

Out there in the middle of winter, V and I were the only two souls, but it felt more surreal than peaceful. I put it down to the groundskeeper playing a recording of the papal Mass in the background.

Pilgrims left the crosses as votive offerings, or in memory of their loved ones. From the inscriptions, they seemed to come from all walks of life. Whether they were tourists or an entire firefighting division, they’d all made the trip to the Lithuanian countryside to give thanks and to pray. It felt okay to be a busybody, to read the prayers that people left, and perhaps draw inspiration from their little acts of faith.

READ  The Long Way to Get to Nida 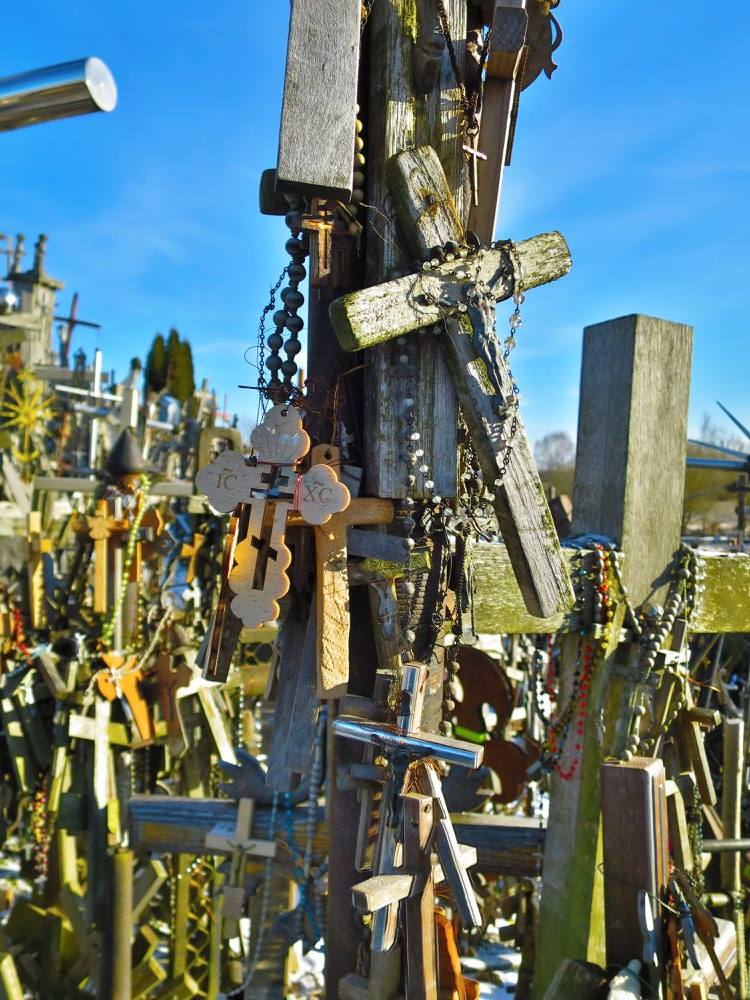 Pride of place went to a large cross at the foot of the hill that was erected to commemorate Pope St John Paul II’s 1993 visit. The altar where he celebrated Mass that day remains to this day and you can read his sermon here. (in Italian).

We ended up spending 40 minutes at the Hill of Crosses after travelling for four hours. Personally, I felt it was making the trip to see something rather extraordinary. We did it in the cheapest possible way but you can drive here or take a tour that includes a stop at the site instead. If you want to explore more of Lithuania, you can visit it on en route to Palanga or Klapeida from Kaunas or Vilnius. It’s your call and your money, of course.

Getting to the Hill of Crosses via public bus

^ Admission to the Hill of Crosses is free.
* Avoid Ollex’s minibuses unless you’re a masochistic midget. Read more about my suffering in this early post about my trip from Riga to Nida.

« Tam Coc: The Alternative to Halong Bay for Tight Schedules » How to Travel in Winter With Just a Cabin Bag