A Bagan Temple Route to Follow on Your Own

The weather forecast didn’t look good before I left for Myanmar. I’d booked a hot air balloon flight especially for New Year’s Day but, closer to the date, the chances of rain kept increasing. I hoped I wouldn’t have to activate Plan B and plot a Bagan temple route on a bike in wet weather.

In my dreams, I imagined myself floating in the basket of a hot air balloon over some of Myanmar’s most famous pagodas and stupas as the sun rose. The peace would be interrupted occasionally by the hissing of the burner above, while people below aimed their cameras at us.

It was not to be

I opened my eyes on the morning of my balloon flight and it was pissing down. How could this be, in the middle of the dry season? Needless to say, the flight was cancelled. If I wanted to see those temples, I had to rent an e-bike and ride there. Bicycles were available and cheaper, but after the pain of cycling around Angkor, I decided against renting them.

The wet, overcast weather meant that there were no pretty skies. However, it also meant that foreign tourists were a tiny minority over the holiday, and the plains didn’t turn into a dustbowl. Hundreds of temples dot the area, thanks to the attempts of Buddhist Myanmese kings to make merit over the centuries, and it would’ve been impossible to see them all. Instead, I picked out the most interesting ones.

Here’s the route that I took, with some modifications and useful information from my art history classes. I’ve included a Google Map at the end.

From the roundabout in front of Ostello Bello, in the middle of New Bagan, I headed west, then turned right onto the main road, in the direction of the Myinkabar village. Before the lanes split around a shrine in the middle of the road, you’ll pass Nagayon on your right. You can’t miss it or the massive brick wall that goes around it and it’s still very intact, so you can explore it if you wish. 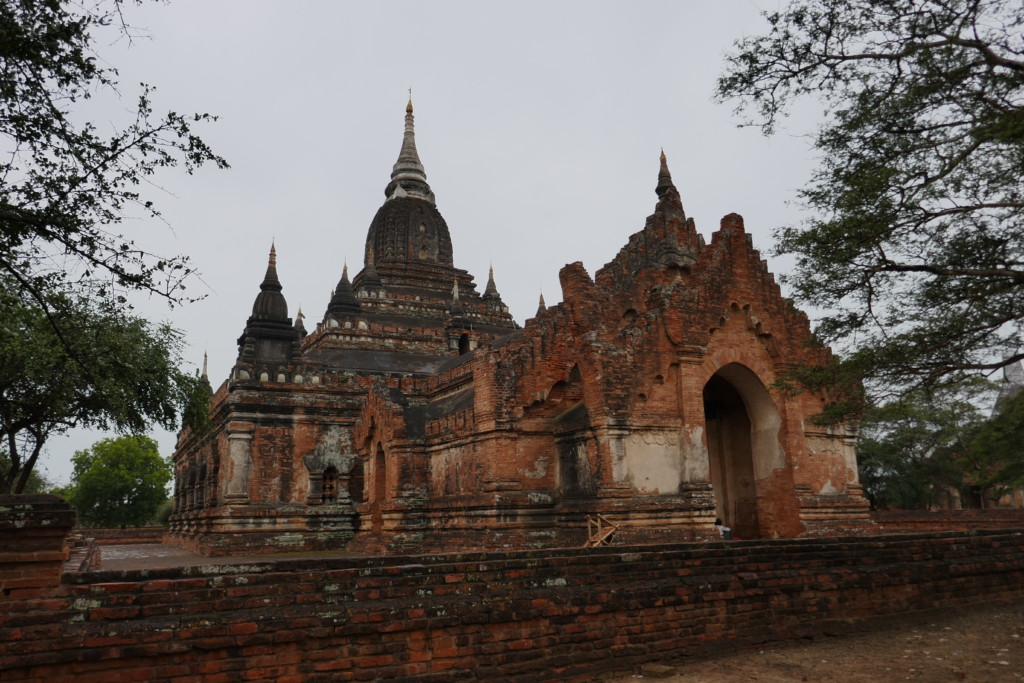 The gleaming white Manuha temple is next up on the left. It’s the replacement for the smaller and older Nanphaya – go through the gate on the left and up the ramp/steps to reach it. What’s interesting is the presence of reliefs of the deity Brahma inside. You rarely hear about the impact of Hinduism in Myanmar, so it came as a surprise to me. The 1975 earthquake felled the standing Buddha inside, while 2016’s disaster damaged the friezes outside. Be aware that the stallholders outside can be rather persistent. 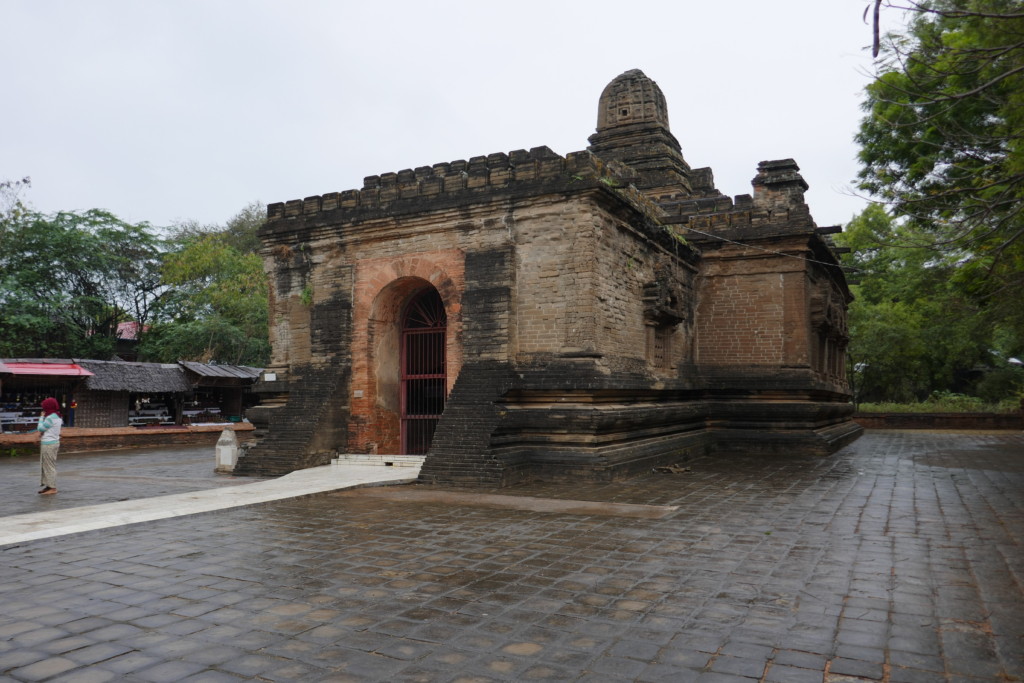 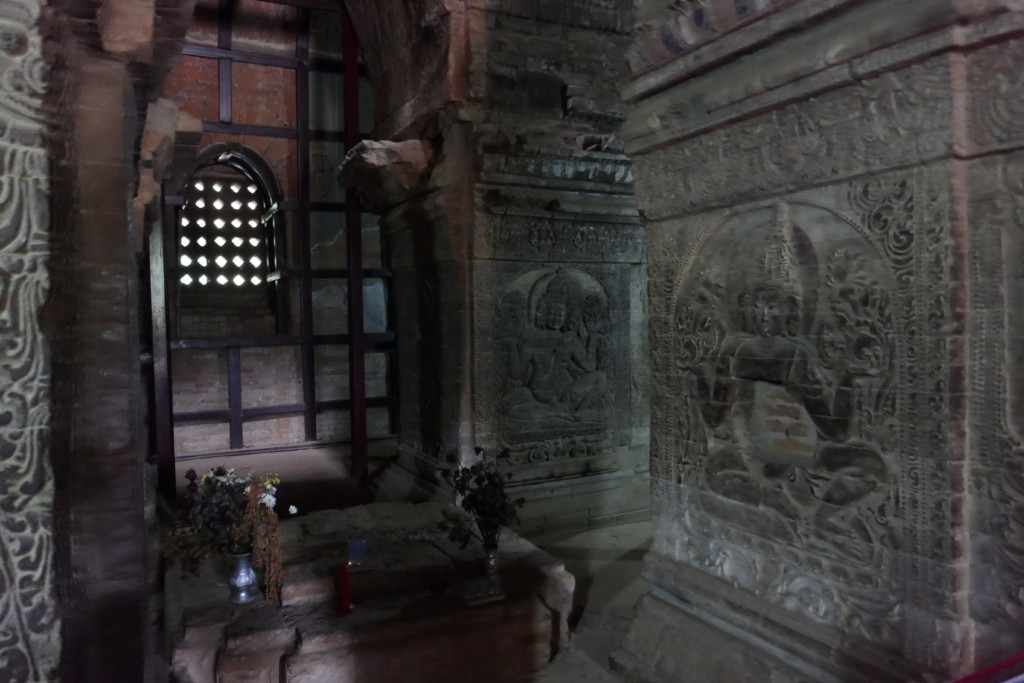 Rejoin the road and keep heading north. After the shops, you will reach Gubyaukgyi on the right. It houses the Myazedi Stone, a four-sided stele that dates has inscriptions in Mon, Pyu, Burmese and Pali (a derivative of Sanskrit) that date from 1113. It’s the oldest surviving inscription of the Burmese language. 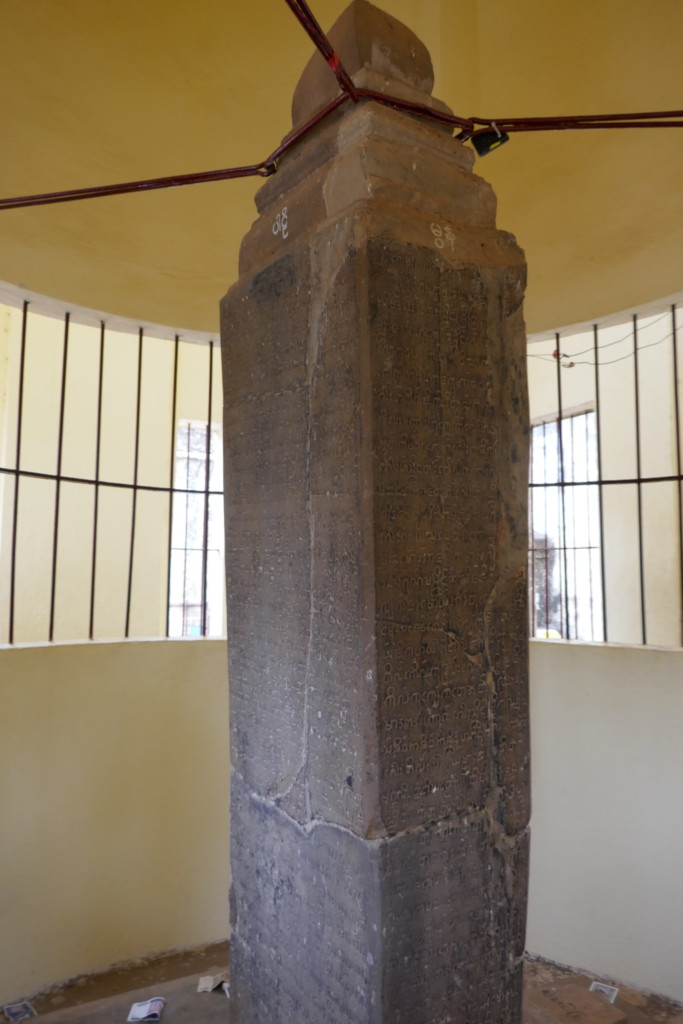 You’ll pass the massive stupa of Mingalarzedi on the left before the first junction. Sadly, it’s closed for repairs Keep going straight and you’ll enter Old Bagan and pass another white temple, Gawdawpalin. Follow the bend to the right; if you decide to split off and keep going straight you’ll end on the bank of the Irrawaddy river at Bupaya. What you see today was rebuilt after the 1975 earthquake. It’s still quite a sight with all that water in the background.

Back on the main road, I didn’t stop at the Bagan Palace ruins or enter the village surrounding the impressive Ananda Temple. Note that this is one of the places where you may actually get your Bagan entry pass checked.

There might be a traffic jam around Tharabar, the last surviving gate of Old Bagan because it is not passable to four-wheeled vehicles. Nonetheless, you can ride through it and over the moat. 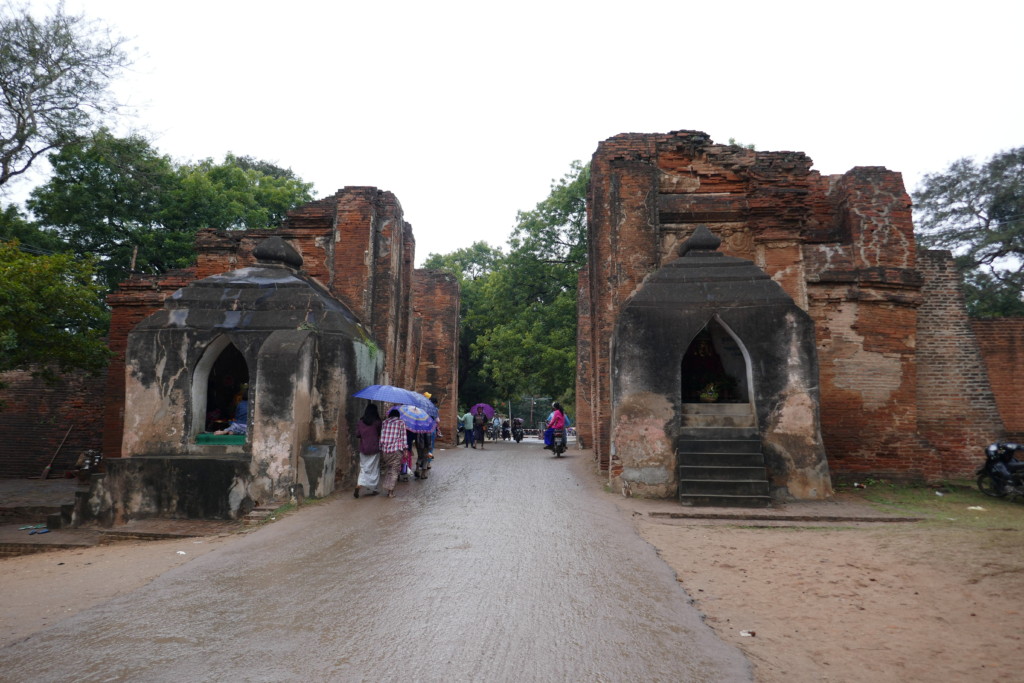 Read more: Cycling in Saaremaa, Estonia and cycling in Utrecht, the Netherlands

Keep going towards Nyaung U. On the left, there is a very long passage that leads to the busy Shwezigon temple and it is lined with countless shops. They’ll even offer to look after your bike. However, there’s something else worth checking out. Follow the side road in front of the passage and the signs to Kyanzittha Umin, a cave temple with recently-restored 13th-Century wall paintings. No photos allowed inside, and it’s not a good idea to touch the paint either.

The lane that runs alongside the passage eventually rejoins the Nyaung U Road. If you’re peckish at this point, there are plenty of restaurants, in the side lanes but I didn’t sample any of them. You’ll have no lack of options, however.

If you have no intention of checking out Mani Sithu market for the produce and souvenirs, turn right at the junction in front of it. Keep following the road and it will sweep to the right. You’ll know it when you pass the traffic island that Sapada Phaya stands on.

On your right, you’ll find Wetkyi-in Gubyaukgyi well-signposted. Besides the tall pyramid tower, it’s known for its frescoes that feature the Jatakas, or scenes from the previous lives of the Buddha. You can step inside to take a look but photography of any sort isn’t allowed. A colonial-era thief left the cut marks around each of the scenes in 1899. 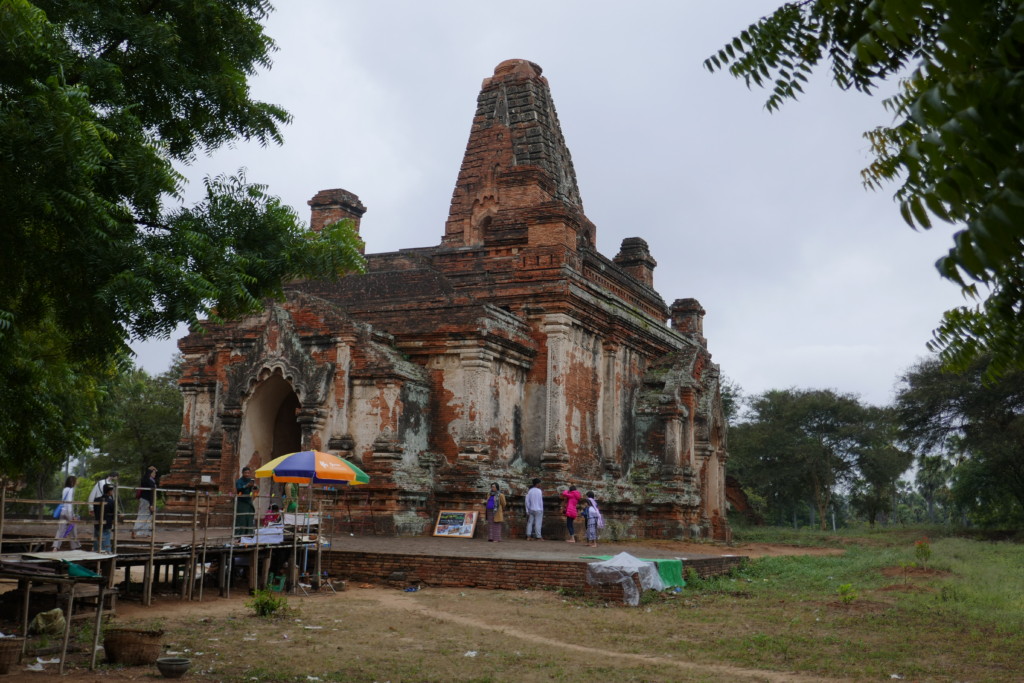 Keep following the road and you’ll reach Minnanthu and the edges of Old Bagan. It features the most famous and magnificent temples in Bagan but you won’t be able to see them from the main road and many are still undergoing repairs. They include:

If you ride around to the south side of Dhammayangyi, you’ll reach North Guni and South Guni. You can climb the latter and get a wonderful view of the above sites and many more. Rejoin the main dirt road and head towards Dhammayazika; many smaller temples line it and you can climb a few of them to another great view. I’ve marked on the Google Map of the Bagan temple route.

Once you pass Dhammayazika and reach the asphalt road, turn right and you’ll return to New Bagan via the east. By this time, you’ll be dusty, muddy or both, but you would’ve seen the main highlights of Bagan on less than US$4.

Tips for riding an e-bike in Bagan