What to See in Pärnu in Winter

Four hours. No more, and, thanks to Lux Express’s punctuality, no less. That’s all the time I had to visit Pärnu in February. Visiting a beach resort town in winter was probably one of the craziest things that I’ve done but I didn’t know if I was going to pass that way again. Hence, I broke the bus ride from Riga to Tallinn up for an additional two euros to stretch my legs.

If you feel like taking just a short break from sunbathing in the summer, however, you can easily complete this in half a day. I found that when you take away the sun and the sun-seeking tourists, you’re left with just a handful of sights. However, they also happen to be some of Estonia’s most important historical places.

At 8 p.m. on 23 February 1918, Hugo Kuusner of the Salvation Committee (Päästekomitee) read the Manifesto to the People of Estonia from the balcony of Pärnu’s former Endla theatre, proclaiming the Republic’s independence. Twelve hours later, the same was read in Tallinn. Estonia became a sovereign nation.

Sadly, perhaps due to its historical significance, the Soviets demolished the theatre in 1961. A full-scale replica of the balcony was built close to the original location, near the bus terminal, in 1989. Visitors can view an oversized reproduction of the Manifesto and a drawing of the theatre’s facade. 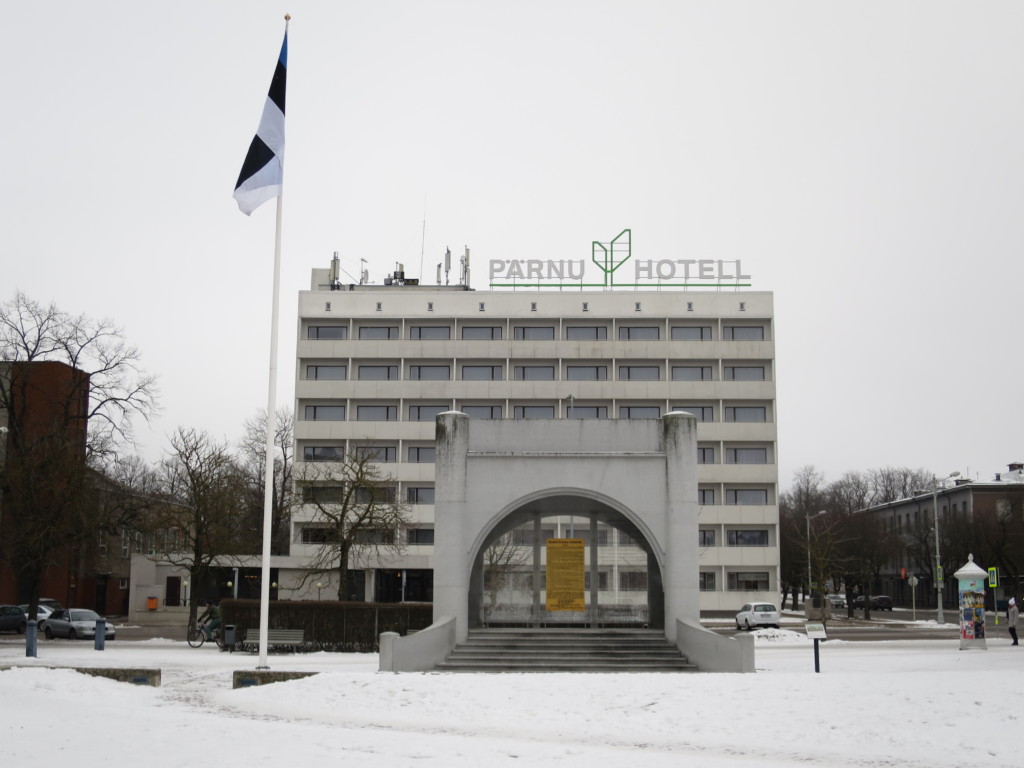 Under an overcast sky, amid a snow-covered square, the concrete monument looked especially sombre in the shadow of the Pärnu Hotell. Only a lone Estonian flag fluttering in the wind and the declaration provided a hint of colour. I’m sure it won’t be the case when the Manifesto is read again here in 2018.

Destruction on the other side of the world: the Old Summer Palace in Beijing

I headed west on Rüütli, which divides the old town in two. This pedestrianised street is packed with tourists in July, especially Russians, but even at midday in February it was silent. The architecture is not particularly uniform, with both wooden and art nouveau houses filling the blocks. The pretty Red Tower (Punane Torn) did not look accessible and getting a good photograph alone was hard!

READ  In the Footsteps of the Rose of Turaida

Unfortunately, both the Elizabeth and Catherine churches close in winter, so there was no opportunity to see their interiors or climb them. At the end of the street stands the rebuilt Endla Theatre. While it bears no resemblance to the old building, you can still catch a play or a cuppa. I wasn’t in the mood for either. At this point, life reappeared, albeit in the form of moving cars on the busy Vee/Akademia thoroughfares.

See also: A taste of Estonian wilderness in Viru bog

I climbed the little ridge behind the Pärnu library to reach a park. The canal freezes in winter; under all the snow, both water and earth appear as one. Again, it was eerily quiet, even in the neighbourhood on the opposite bank. Sound travels farther in such conditions and I was the only thing I could hear. On this side, there was also a smithy but I didn’t think to look inside.

At the end of the park stands the last surviving bit of a Baroque-era bastion, the beautiful Tallinn Gate (Tallinna Värav). You’ll also find a small scale model of the old city in front of it. A nearby mini-zoo consists of terrariums that are home to spiders, snakes, tortoises and other reptiles. 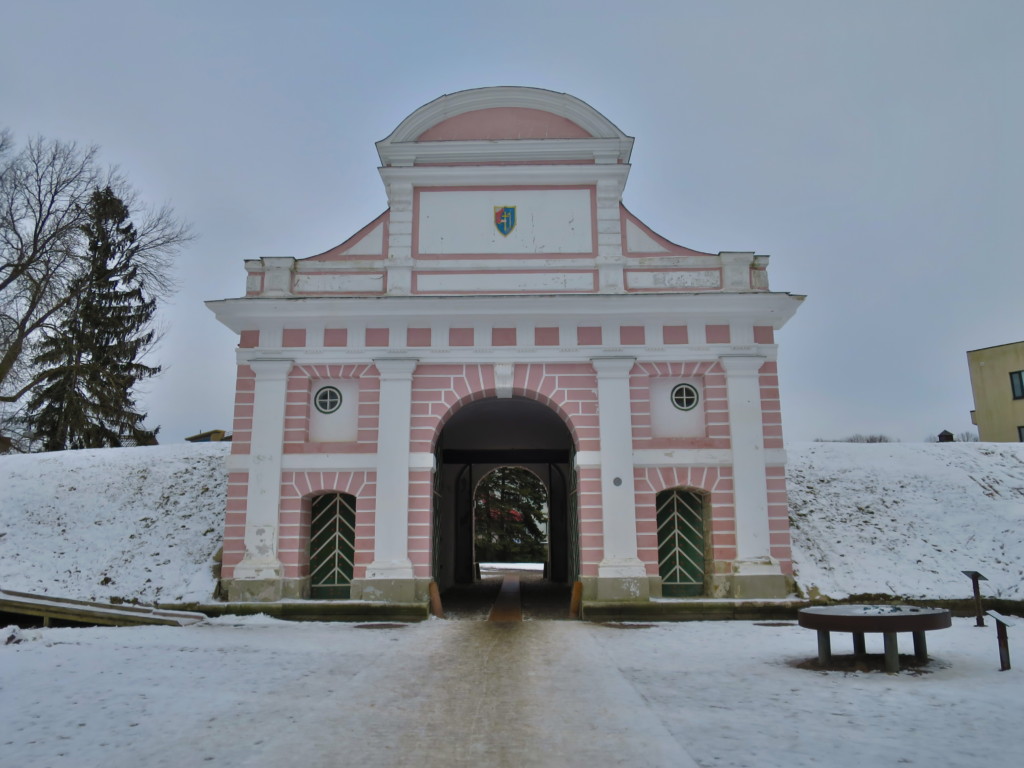 Other places I’ve been to in Estonia: Try Tartu for the student life and Kuressaare for the island life

It’s a 15-minute walk down Mere puiestee, past the empty chalets and hotels, to get to the beach. One could complete it in less time in the summer but I had patches of ice to deal with. Sand and frost turned out to be a relatively grippy surface. A handful of people were walking on the sand and the frozen bay.

My stopover wouldn’t have been complete without seeing the Rannahotell that brought Pärnu’s beach resort into the 20th Century. There was just enough time for me to admire its Modernist lines – and spy the staff taking a break. The restaurant menu that was displayed on the beach dated from 2016, so I had no idea if it was open. There should be no doubts in 2018 since there’s a special centenary dinner menu on the website. 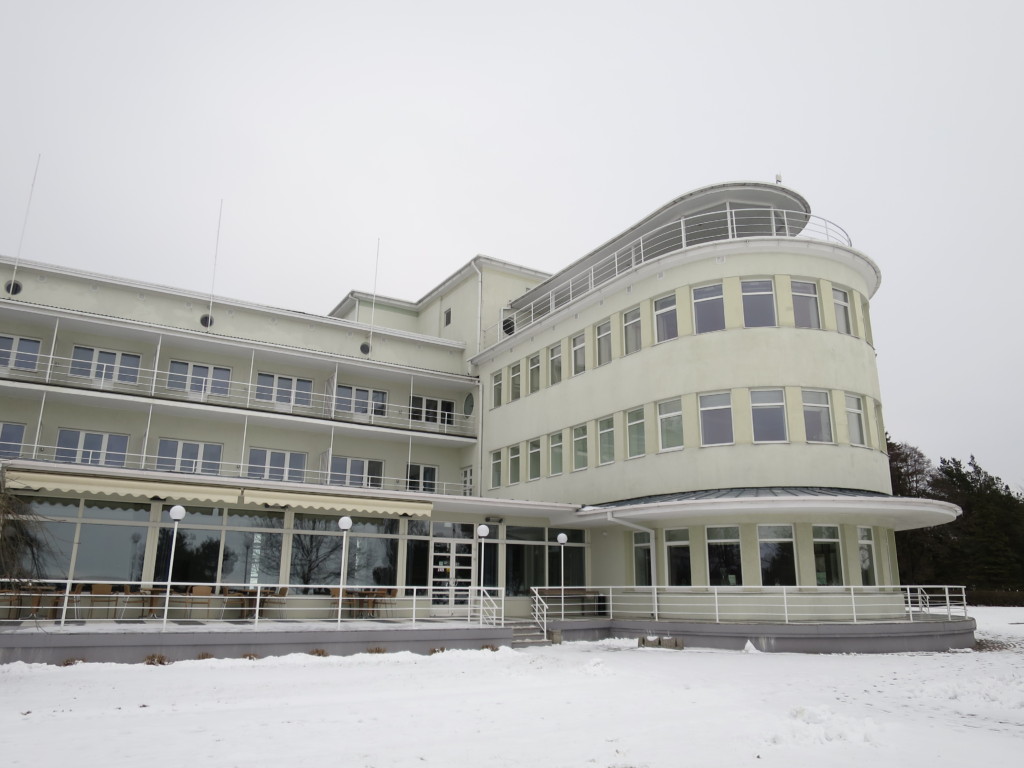 If Rannahotell is a symbol of 20th-Century Pärnu, the Hedon Spa-run mud baths (Pärnu mudaravila) represent its 19th-Century past. Its Raimond restaurant is named after the composer Raimond Valgre, whose statue sits in the nearby park. Somebody was thoughtful enough to put a red scarf around his bronze neck while he “played” the accordion. His music plays from a speaker in the background; it would’ve been a sweet hangout in the summer. 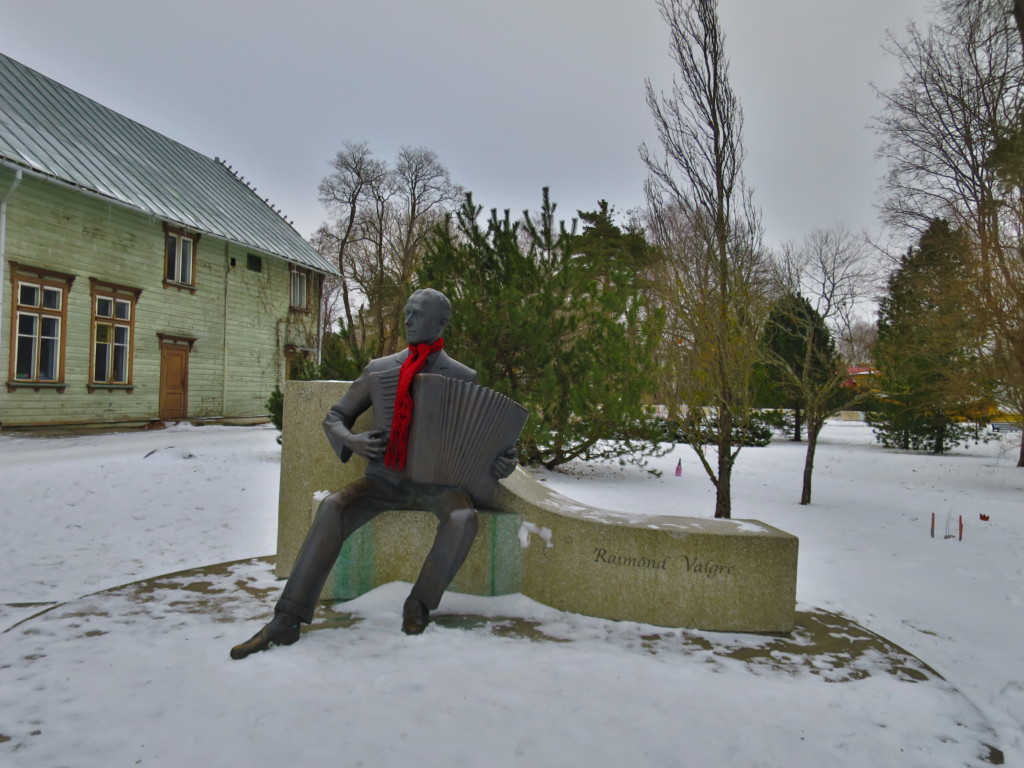 And with that, you can follow Supeluse to return to the bus terminal, passing more vacation homes and a park dedicated to the poet Lydia Koidula. Here’s a map of the route and the highlights that I just described. I didn’t eat or sleep in Pärnu, so I’m afraid I haven’t any recommendations on this front.

Do you enjoy travelling during the low season?