Why Borobudur at Sunrise is Worth Every Single Rupiah

I’ve never been a big fan of jostling with crowds on my travels. When I learnt that I could avoid them by visiting Borobudur at sunrise, there wasn’t going to be any other way I was going to do it. The early entry price was worth every extra Rupiah (400,000 Rp vs the usual 230,000 Rp). This is Indonesia’s single biggest attraction after all.

The sunrise visit begins at the Manohara hotel, which has its own entrance to the site. One doesn’t need to stay at the Manohara to enjoy this; just show up at 4.30 a.m. if you prefer to wait and see what the weather does. Spaces are limited, however. It can be reached on foot from Saraswati (where I spent the night) and Lotus guesthouses. It’s safe to walk through the village that early. The motocab drivers still asked if I wanted to go to Borobudur when I was clearly heading there, but it was more amusing than annoying.

There were other tour groups that headed to the nearby foothills to watch the sun rise from behind Borobudur. Most would return to the site later, while those who aren’t interested in seeing the stupa could presumably sleep in. Not me, however. I didn’t put up with flight delays to miss what I had to study in university up close. 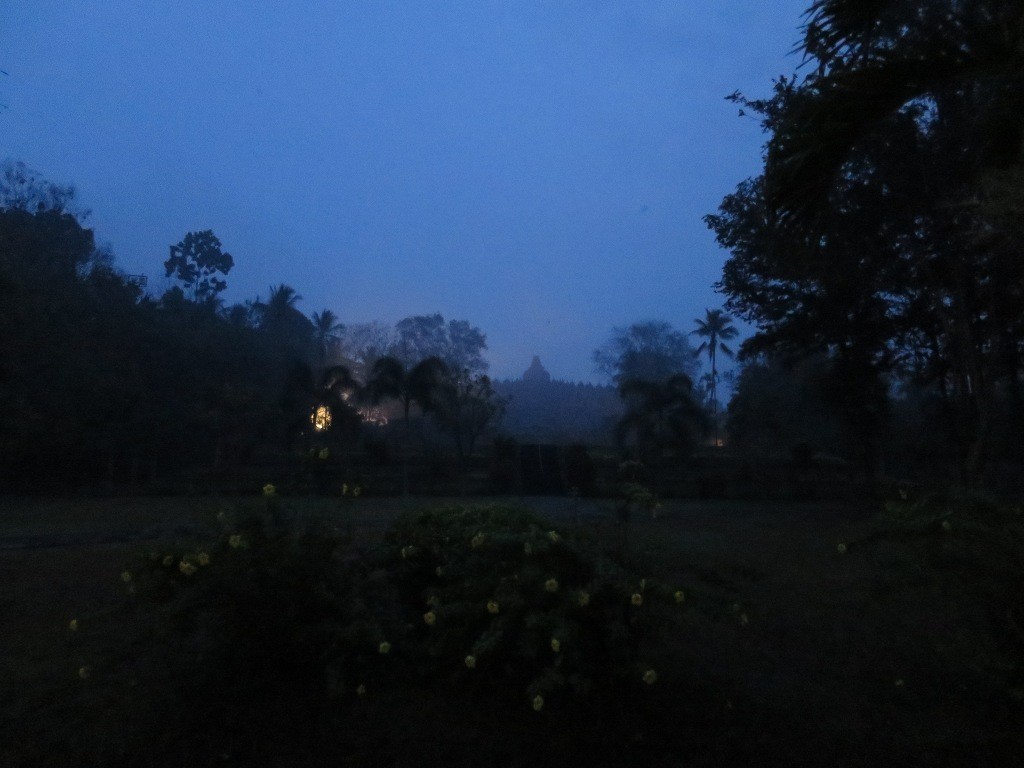 We were given torch lights to navigate the hotel’s gardens, but not the sarongs that Wikivoyage said we’d have to wear. It wouldn’t be nice to lose them in the dark, anyway. There was only one place everyone was headed, and that was the top of Borobudur. It’s a steep climb – this is why we travel when we’re young!

A purist would say that we should have started at the bottom. There, the viewer would have seen reliefs depicting the world of matter, ascending through the Jataka (the previous lives of the Buddha) and episodes of his final earthly life, before finishing at the top. The topmost levels represent the world of forms; the Buddha statues within the stupas are only partially visible.

There were at most 60 people at the top of the monument. I recalled being very uncomfortable at the top of a crumbling Phnom Bakheng with hundreds with others. This felt infinitely better, even if it wasn’t as exclusive as the dawn in Neringa. Prayer calls reminded all that we were in a Muslim country. Borobudur and nearby Prambanan reminded us that other religions once dominated this country.

The weather was kind in view of my visit during the rainy season. There were some clouds but they enhanced the spectacle. As sunrise drew near they turned pink and orange. Meanwhile, the mist that shrouded the landscape appeared impenetrable.

A tiny red spot emerged in the distance. It wasn’t long before the spot radiated golden beams. An hour later it would reveal itself to the hordes waiting at Angkor Wat. Singaporeans would’ve simply slept in. It was a weekend after all. Some of the local guides who were with us did likewise while their visitors went ‘ooh’ and ‘ahh’ over the sunrise. 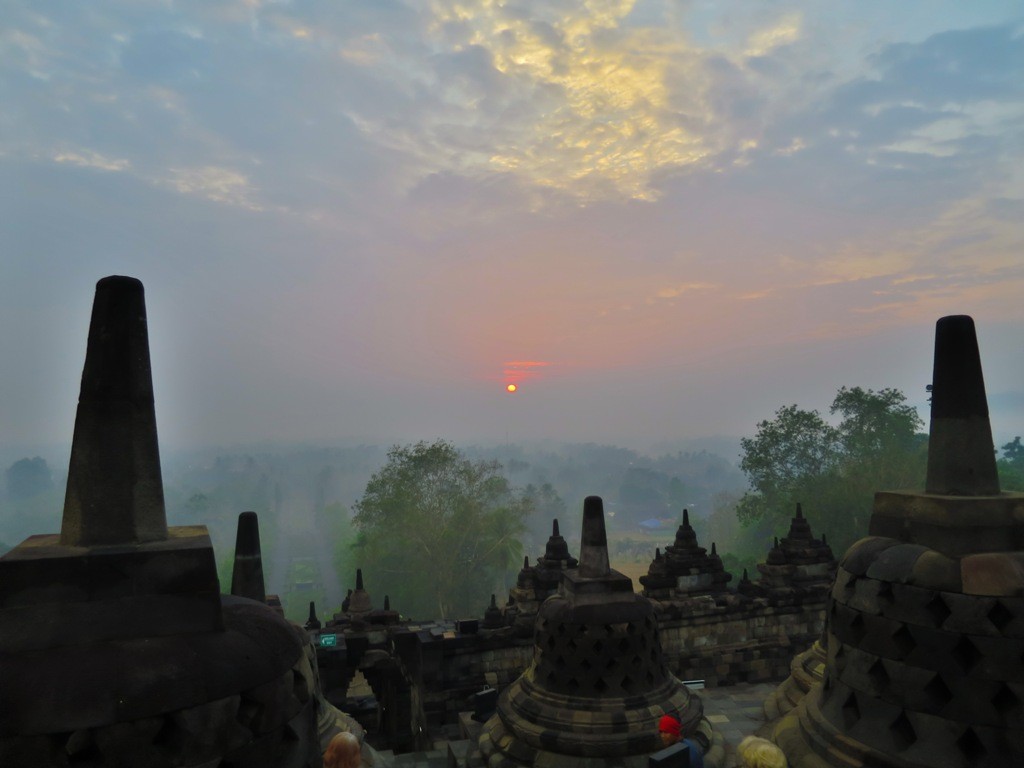 At times, Mount Merapi can be seen to the north-east. Not this time, however; the mist clung on long after the sun had risen. Merapi is an active volcano, and it smothered Borobudur with ash in 2010. I think we are lucky that Borobudur has survived more than 12 centuries of natural disasters as well as a bomb blast. That it will continue to do so is far from assured, given the religious extremism that is emerging in the region.

The morning sun bathed the reliefs depicting the Jatakas in a warm glow and the shadows brought out the volumes. There was plenty of peace to contemplate the beauty of the restored work. 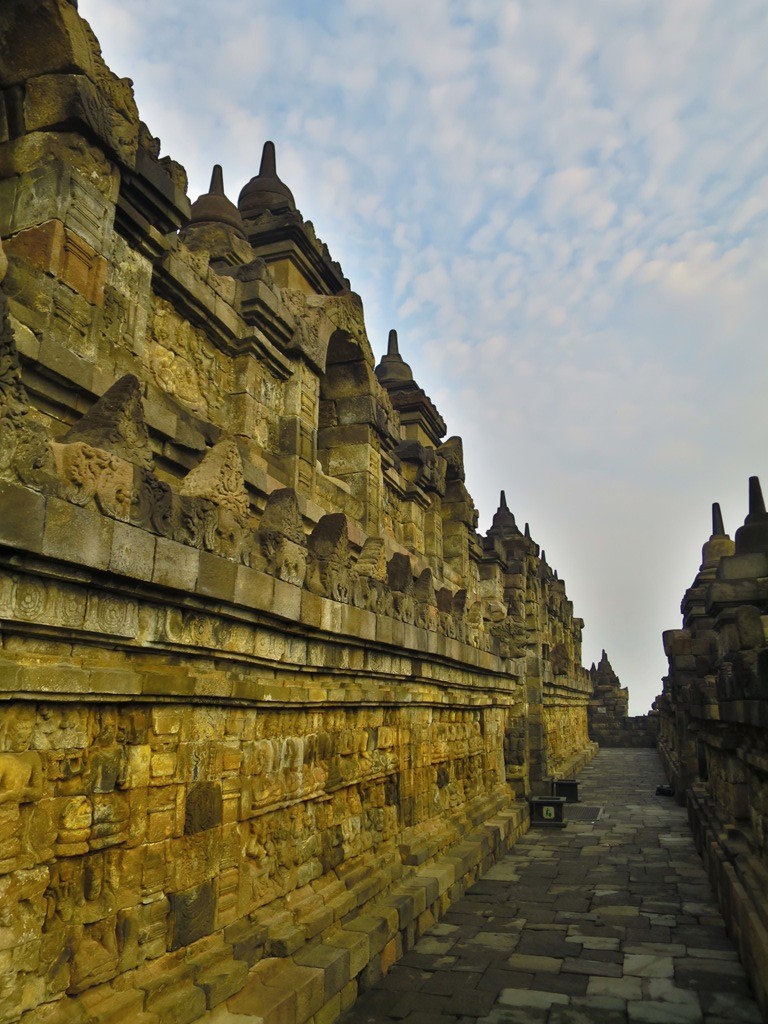 At 6 a.m., we could see other tourists pour in by the hundreds as the main gates opened. Most of them were heading for the top that we only just vacated. I would rather not have to jostle with them for space.

I made it back to the bottom at 7 a.m. There is a separate exit that leads back to the hotel in the southeastern corner of the stupa, instead of the long-winded route through the tourist market. (I had a look around anyway, and at that hour there were more chickens than people)

There were a few persistent touts lying in wait with their postcards and miniature stupas, but I only needed to repeat ‘no thanks’ for about 30 seconds, not 30 minutes. Light refreshments and a souvenir batik were waiting in the coffee house; what a nice way to end the visit.

When you’re done, why not check out Pawon, Mendut and the farms around Borobudur? Need an adrenaline rush instead? See Life of Doing‘s amazing adventures in Indonesia.