Visiting Roluos: Angkor Without the Crowds

Fresh from a visit to the temple ruins of Angkor with one more day on my pass, I scanned the other trips that were listed on the Siem Reap Hostel whiteboard. In addition to the places that I’d already been to, there were trips to Banteay Srei, Tonle Sap lake and the waterfall at Kbal Spean (I saved my waterfall joy for Kuang Si).

I put my name down for a trip to Roluos, where ruins from the 9th-Century Khmer capital of Hariharalaya still stand. That makes them contemporaries of another famous ruin in Indonesia. How different would they look, I wondered.

24 hours later, my name was still the only one that was down for the Roluos trip, while the other trips were full. I guessed that everyone else had “temple fatigue,” so I stumped up $10 for the ride on my own.

The tuk-tuk headed east and within 5 minutes, we were out of the city. Rice paddies stretched from the edge of the tarmac as far as the eye could see. Water buffalo had free rein. The side roads leading to the ruins passed traditional houses. I wondered if people lived in similar houses a thousand years ago when this city was at its peak. 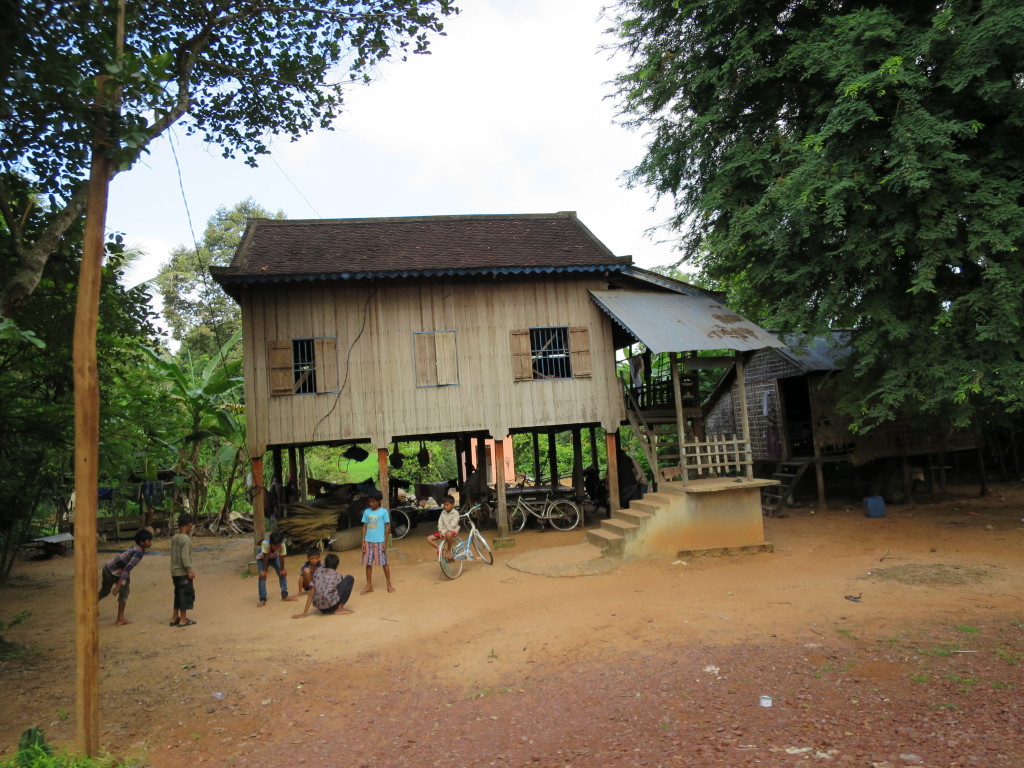 The first stop was Lolei and it was underwhelming at first sight. The sound of angle grinders greeted us before the four towers came into view. Two of the towers were held up by braces and surrounded by scaffolding, while the other two had already collapsed, revealing the brickwork within. Tufts of grass grew out of the top of the towers as if Nature was in the process of reclaiming the place, and more bricks lay strewn on the ground.

Peering inside the shrines revealed that the locals still use it, as they had placed offerings neatly in the shrubbery. The doorways still featured ancient Khmer inscriptions (or is it Sanskrit?). If it was more frequently visited, grimy tourist hands would have worn them out long ago.

The restoration work aside, I appreciated the peace of the site. The brolly brigade and the tour buses were conspicuous by their absence. Kid touts were nowhere to be seen because they were at class in the school next door.

On the other side of National Highway 6 were the other two prominent ruins. My arrival at Bakong was timed nicely, near the end of a Korean tour group’s visit. One can just make them out in the photograph descending the ruin.

In some ways Bakong resembles Angkor Wat, in particular its moat and serpent-lined causeway, temple-mountain structure and Hindu roots. The stepped pyramid appearance has more in common with the Bayon and Borobudur though, even if those are Buddhist sites.

Most of the things that would be of visual interest have collapsed or been eroded. There are no giant faces, and only fragments of end-to-end bas-reliefs remain, but several stone lions and elephants still stand along the staircase and at the corners of each level.

There isn’t much to stay of the view from the top – one sees the nearby Buddhist temple and village, the forest, the moat, the stalls in the vehicle park and any incoming tour groups. I saw another arrive after I’d spent an hour at the site – this sort of peace is a luxury at Angkor’s ruins.

This collection of six towers dedicated to Lord Siva was my last stop, and it is the oldest of the three sites. It was restored in the 1990s, but the stucco was already crumbling from the brick faces. It was still fun to walk around each tower to see what remained, provided one knew the icons and the avatars that flanked the doorways.

One needs a ticket to visit Roluos’ ruins – the same one that gives access to Angkor Wat – but they have not received the sort of attention from tourists and the authorities that have been afforded their younger “successors.” Perhaps the lack of a crowd feeds the lack of investment in a cycle that would be difficult to break.

Even though the restoration work is still taking place, I would still recommend it to serious art and history buffs. To the rest, it’s a chance to experience what an “un-commercialised” Angkor must have felt like.

Did you catch the sunrise at Angkor Wat? If you haven’t, check my pro tips out.

« Delays on the Road: The Side of Travel You Rarely See » What to See in the Iron-Age Village of Biskupin