The story of the takahe’s return from near-extinction is a remarkable one. This rare flightless bird was once widespread throughout New Zealand – until habitat loss, deer and stoats took their toll. By the end of World War II, no one had seen a takahe in the wild in nearly half a century.

However, one Dr Geoffrey Orbell, a doctor from Invercargill, persevered with his belief that there were living birds in the Kiwi wilderness. In 1948, deep in the Murchison Mountains near Te Anau, Dr Orbell and his companions rediscovered the birds. It kickstarted efforts to nurse the species back to healthy numbers. It was thus fitting that I came face-to-face with the takahe in Te Anau.

I braved a chilly autumn morning to watch the feeding of the birds at Punanga Manu o Te Anau (Te Anau Bird Sanctuary) and learn a bit more about them. Being allowed inside the enclosure was a pleasant bonus!

As feeding time neared, a pair of takahe emerged from the shrubbery and worked their way towards the ranger, necks straining in anticipation. They were beautiful birds; the thick dark green plumage looked regal with its violet splashes. Finding out that they were monogamous brought out the ‘awws’.

While we learnt that it likes eating alpine grass, the two young specimens seemed content with the feed in the boxes. A pukeko shared the enclosure with them. The two species are closely related, but the former, being common across the country and across the Tasman in Australia, received far less attention from the humans present. If pukeko had feelings, it must have felt like the ostracised housemate, helping itself to the food only when the takahe had their fill.

After the feeding, the ranger told us about how the birds would lay a solitary egg in a burrow. She then presented a convincing-looking model of the egg. I thought we were a lucky bunch when I saw an egg in a supposed nest. It turned out to be yet another model to entertain the children with.

Other birds of the sanctuary

There was also an older pair of takahe on the grounds. I no longer remember any names, so any help is welcome! While the takahe are the highlight of the sanctuary, it also rehabilitates other native and endemic birds, and these are definitely worth a look. I spent a good amount of time there and took photographs of a few of them. 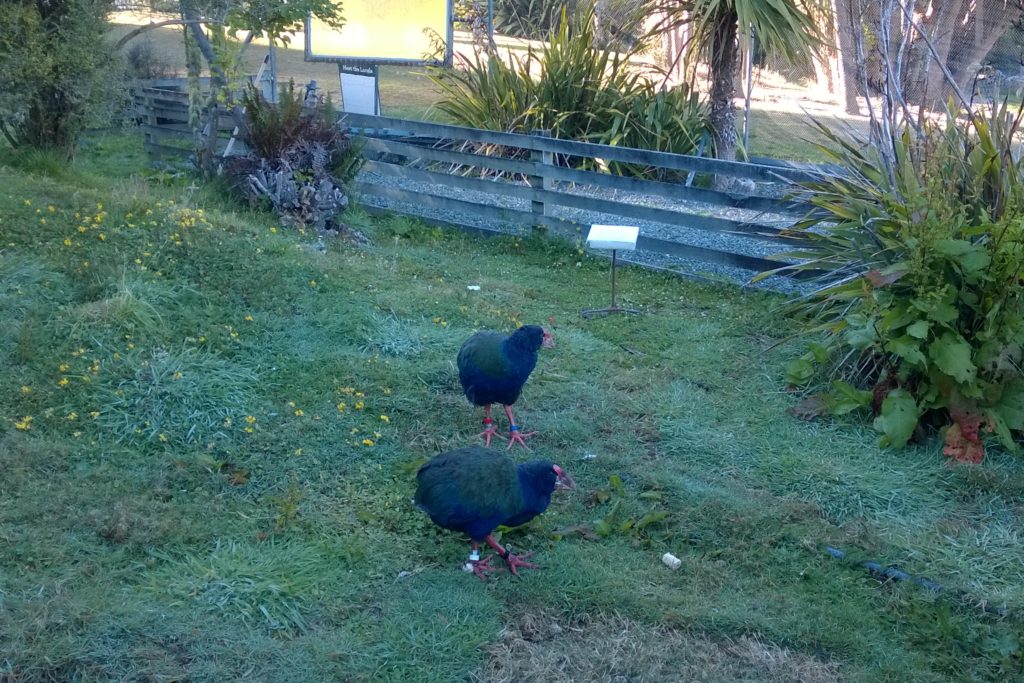 Even after the encounter with the kiwi on Stewart Island and a trip to Milford Sound, meeting the takahe left a deeper impression on me. Perhaps it was the proximity, or because it had history written all over it. If nothing else, though, it was a reminder that even one man’s lucky efforts can bring a species back from the brink.

Leave your car at the Fjordland Visitor Centre in Te Anau. From there, head south and follow the footpath along the shore of the lake. It will take you past the boat club to the Te Anau Bird Sanctuary in 10 minutes. Takahe feeding times are 9.30 a.m. in the summer and 10.30am in the winter and admission is by donation.

« 5 Tips for Catching an Angkor Wat Sunrise Like a Pro » Cologne Cathedral: One Look Isn’t Enough!