The Top 5 Things to do in Christchurch

On my recent return to Christchurch, fellow travellers to New Zealand told me what I initially feared: “There is nothing to see or do there now.” I went ahead anyway, and it wasn’t half as bad as they described. Yes, the city has changed dramatically since my January 2011 visit, but people have rebuilt their lives and got on with it.

I even found a job advising other visitors on the things to do in Christchurch. Most of them heard the same laments and had planned to stay only a night before rushing off to another scenic destination on the South Island. That’s barely enough to see the interesting projects that have appeared, such as Re:Start Mall and the Transitional Cathedral. I spent almost 3 months there, and I can tell you that it won’t be a mistake if you stay 3 nights or more.

So what’s there to do? Here are my favourites:

Things to do in Christchurch: Saturday Farmers Market

Held every Saturday morning on the grounds of Riccarton House, it’s a strictly a groceries-and-food-only event, with a couple of busking musicians added for good measure.

I loved this place so much that I made it a weekly affair, even if I had night duties. Where else can one get fresh, spray-free seasonal produce for lower prices than even Pak N Save? If I chose to I even asked the vendors to give me the tops of my carrots, beets and radishes. I like pleasant surprises too, such as the week one stallholder turned up with peacherines.

The food is never a let-down, and for me, the hardest part was choosing whether to have a mini quiche, empanadas, pita with thyme yoghurt and chilli, or a bagel with melted raclette for breakfast, before sitting by the stream with the shelducks to watch the world go by. Then I might forget that my one hour of parking was over, and scramble to get the rest of my groceries.

There is a craft fair on the same site on Sundays. A larger market organised by the Rotary society takes place at the racecourse, but it doesn’t feel as intimate. You can find the cheap wares and secondhand goods that the Saturday market is bereft of there.

Directions: Take Bus 3, 5, 83 or 84 from the central bus exchange to Westfield Riccarton Mall.

READ  How I Got the Ultimate Lake Matheson View

Things to catch: The Court Theatre

If you like improvised comedy, then I cannot recommend the late night ‘Scared Scriptless‘ shows enough. Folks are allowed to bring drinks from the bar into the theatre (wahey!), and it’s a challenge not to choke during the show!

For this genre of comedy, the actors ask the audience for suggestions (names of celebrities, locations, events, etc), which they then incorporate into the following sketch. There is no possibility of rehearsing, but the creativity of the cast means the results are hilarious. And it could be thanks to you!

Directions: Take Bus 7 and alight in Addington. It’s across the road from the historic prison, down a little lane called Bernard Street.

The rebuild in the city centre has been painfully slow, so many commercial activities have moved to neighbourhoods such as Riccarton, Addington and Sydenham. In the meantime, street artists have left their mark on the sides of the buildings that remain. I find that plenty of them have an ironic touch, and they reflect defiance against the situation the city finds itself in. 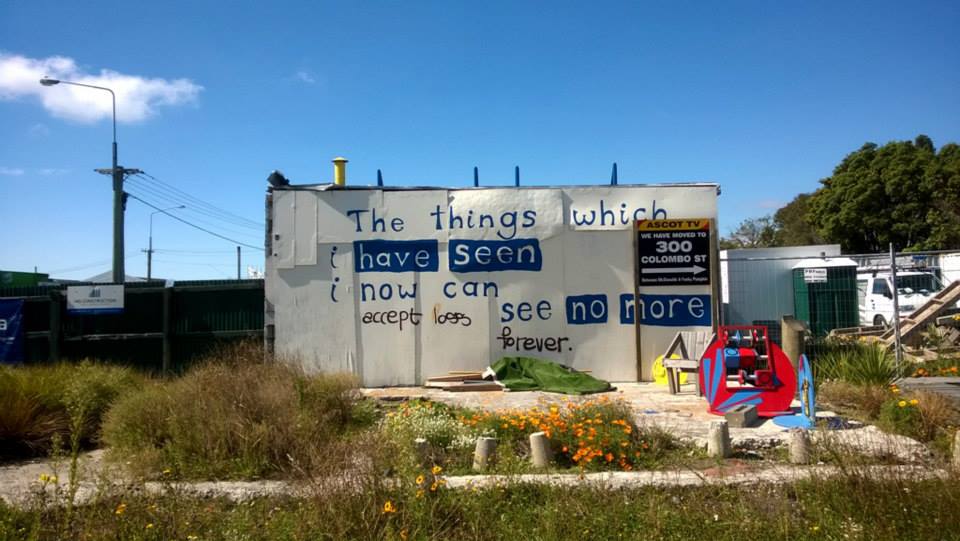 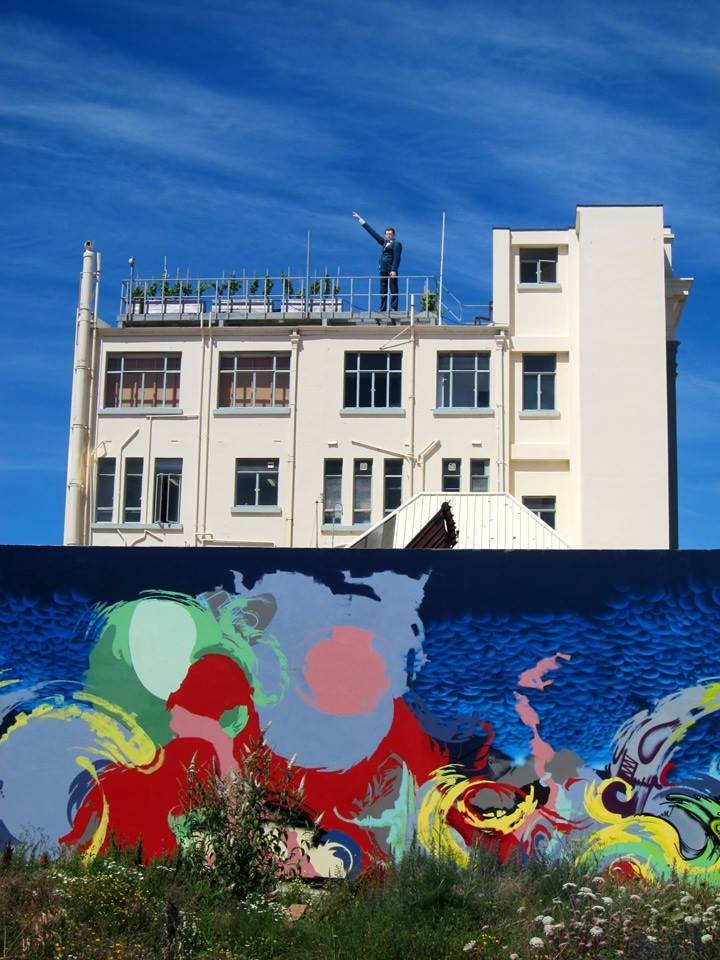 There was even a street art festival in January, which brought works by Banksy and other regional figures to the Canterbury Museum and the city. Thankfully, this is not Singapore so after that ended, the works were left as they were. Keep an eye out for them on the daily stroll. 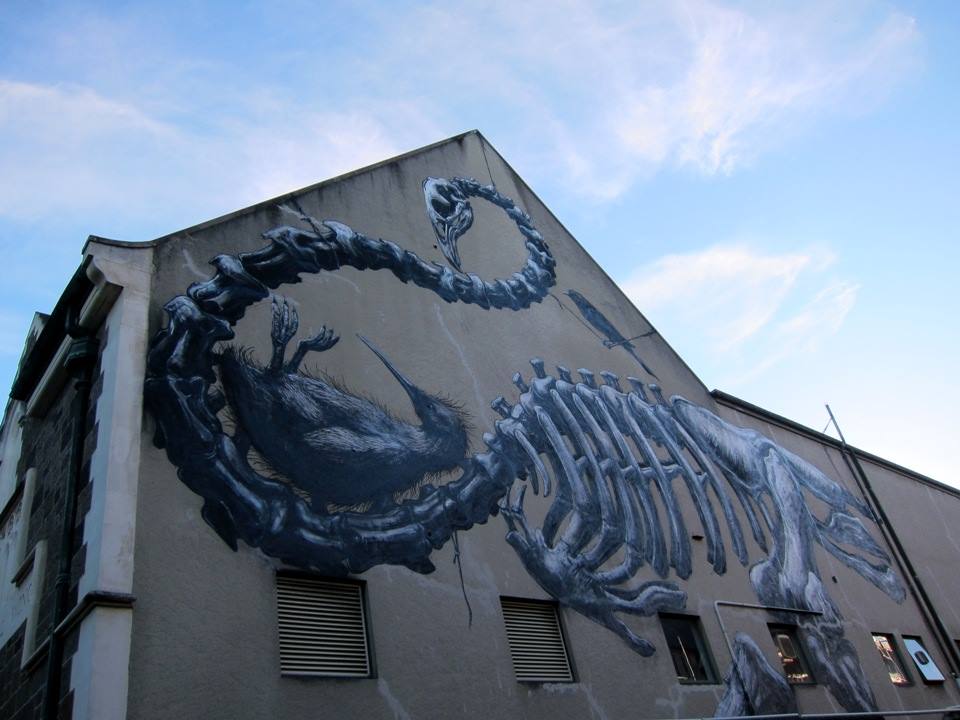 As the South Island’s international gateway, Christchurch still hosts as many major events as it did pre-2011. In the first 3 months of 2014 alone there was the Buskers Festival, a flower show and the Beer Festival, and before the autumn’s out there will also be a Jazz and Blues Festival.  The afternoon that I went to the Buskers Festival was well spent, as artists from around the globe perform hilarious acts and eye-popping stunts. Considering some of the things they put themselves through, it’s a lot of passion for some change in the hat!

Things to do: Drive to the Port Hills

Christchurch is built on a plain that is so flat, one can get around on a bicycle with a single speed. Depending on the weather, the biggest obstacle might be a massive headwind or a bunch of idiots on the road. To the south, however, the Port Hills offer some amazing vistas of the city, Lyttelton and Governor’s Bay on the other side. There is great mountain biking to be had on the steep slopes too.

Getting to the top was a joy for an avid driver like me and a nightmare for less confident pilots. Tight and twisty roads, sheer cliffs, crosswinds, the Summit Road has them all. Drive responsibly unless you have a death wish!

For now, the middle section of the Summit Road is closed. Drive up from the Sumner end to get to the gondola station (which you access via a ranch) to see Lyttelton. The route from Halswell leads to a point where you can see Governor’s Bay. In addition, the beautiful Sign of the Takahe and Kiwi roadhouses are along the way. On a clear day the Southern Alps can be seen; when the cloud cover is low it feels surreal. Either way, you win.

The view can still be enjoyed without personal transport – just take the gondola from the foot of the hills, or take bus 7 to Halswell Quarry Park. The latter is a great picnic spot, and I was surprised to find a little Korean garden there too.

Besides these favourites of mine, there’s also the Antarctic Centre, a myriad of NZ craft breweries and a wildlife park. In addition, Akaroa and Hamner Springs can be visited on a day trip. So if anyone asks about the things to do in Christchurch, please direct them to this post.

Speaking of planning, I strongly recommend booking accommodation in Christchurch well ahead.  It should be apparent given that there is an international airport nearby and the quake took out many lodging options; however, goodness knows how many times I had to turn away people looking for an inexpensive bed or room at the last minute. The crunch is especially bad during one of the big events or when the local rugby team had a home match. Heed my advice and don’t be one of those sorry people.

« The Long Way to Get to Nida » Warsaw Revisited