Swimming with basking and whale sharks has been on my bucket list for a long time, and their gentle nature makes it easy to do so without much protection. But cage diving with great white sharks in New Zealand? The idea never crossed my mind until Noo, my manager at work, suggested that I do it.

Taking a dip in the ocean with Stewart Island great white sharks wasn’t cheap, but since I was heading that way anyway (and with no plans for South Africa on the horizon), the idea became too irresistible. When I told Noo I was keen to do it, she was pleased to have someone evaluate the experience before she made her mind up.

The day finally came, two months later, and eleven of us set off with our captain on a gloomy morning from Halfmoon Bay. It was a somewhat uncomfortable start. You amp yourself in anticipation and save up enough dough for three bungee jumps to go on a trip like this; the least that the promotional materials could do is mention the fishy smell that accompanies you throughout the trip! In truth, I expected a bait of some sort (there weren’t enough seals to go around at that time), but not tuna that was this pungent.

Note: Chumming is banned in Mexico, among other places, out of a concern that it may alter their behaviour and create an unwanted association between boats and food. Your sense of smell would probably prefer that too. I learnt later that the locals are unhappy with this practice as the sharks are approaching fishing boats more often.

But it was worth putting up with – after an hour of chumming, we spotted our first shark!

READ  The Poor Knights Islands Made Me Wish I'd Learnt Diving

At the first sighting of fins, the smell was quickly forgotten. A few of us helped the captain set up the cage, which was bolted to the boat, fitted with gas tanks to make it float and fenced around the top. It was going to take freakish circumstances – or foolish behaviour – for a shark to hurt us.

Making the most of the time in the water was no stroll in the park. There were tasks to be juggled – aiming a camera with one hand at the gap in the mesh, bracing myself as the cage rolled with the boat, and breathing calmly through the diving regulator. With the frigid water filling the wetsuit and the adrenaline coursing through my body, yes, even that required concentration.

All this happened as three large males cruised around us. Each of them was 4.5 metres long, or the size of a large family car. Sometimes they would emerge from the blue haze in the distance and glide towards us, turning mere feet away. At others, they appeared right beside or under us after checking out the other side of the boat. We were the only other living things in the water with them, and they kept a curious beady eye on us. 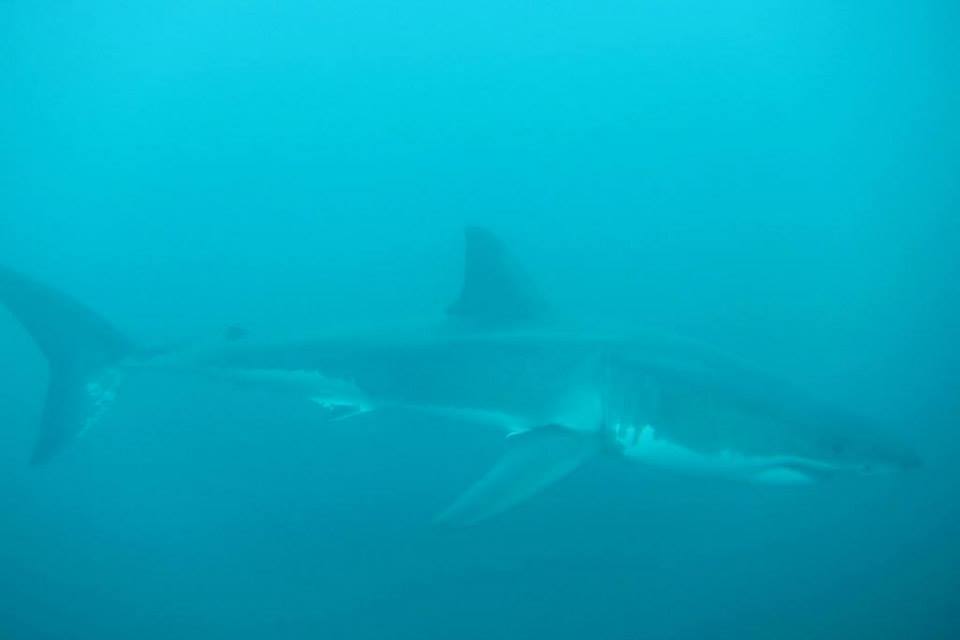 I was in awe of these predators and the grace with which they cruised through the water. Those massive fins, sadly a sought-after showcase in many Chinese restaurants, did their job very well. It was a sight to behold. If they could detect us, we must have looked clumsy to them. What sea creature needs all these aids we were using just to survive underwater?

READ  MariCAR Tokyo: The Insanity of Go-Karting on Public Streets

Those dark, unfeeling eyes and those rows of teeth leave an impression you won’t forget in a hurry. It was like looking at the grim reaper himself. Yet the specimens in front of us were nothing like the mindless killing machines that they are often portrayed as in the media. If I may project human behaviours on them, our fascination with the other species was mutual. I wonder if they associate us with death too, given how many we’ve killed for food and as by-catch.

I never noticed that the bait had drifted close to us. My thoughts were interrupted when one of the sharks surged towards the surface. It swiped the cage as it took a chunk of tuna. Bubbles followed, and there were plenty of them, but there was an odd absence of noise. You can’t scream when you’re gagged by a regulator.

The chum couldn’t keep the sharks interested all day, however. They swam away after a couple of hours but those moments in their presence will last beyond that. It was a privilege to share the water with some of the planet’s top predators, even if we had to lure them to our boat in this instance.

I’m grateful that Noo told me about it; in turn, I think I’ve shared enough to convince her to give it a go. Few items on a person’s bucket list can alter a person’s attitudes quite like this, and it’s my hope that more people will understand sharks, respect them and reduce their desire to cull them.

Other NZ wildlife encounters: The rare takahe and wild kiwi birds at night

« Warsaw Revisited » How to Start Couchsurfing